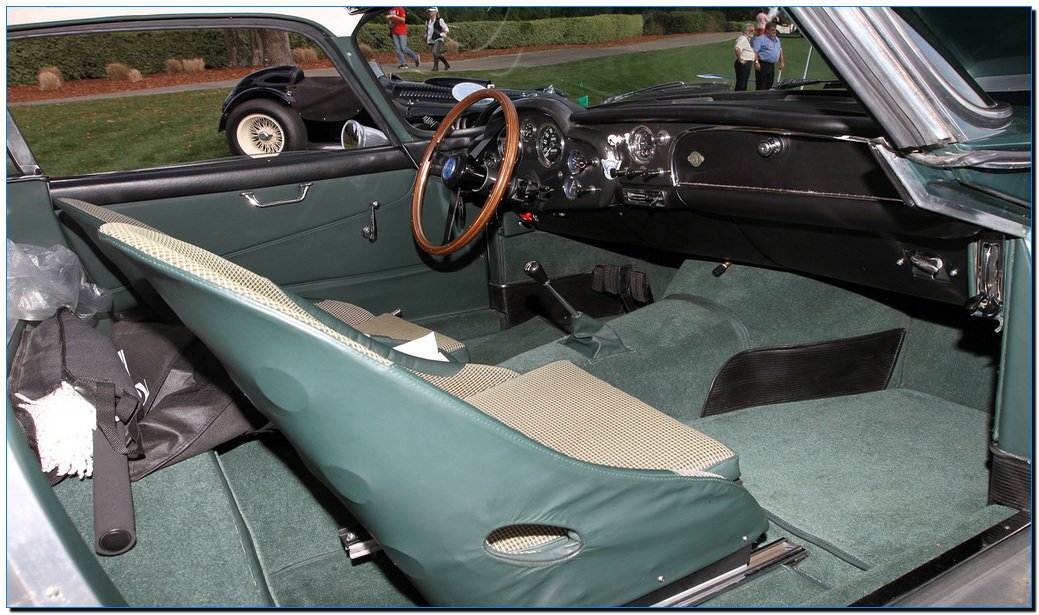 Aston Martin db4 A year after the DB4 fastback was released at the 1958 Paris Motor Show a more potent version called the GT was prepared to stay ahead of competition such as the Ferrari 250 SWB. It was smaller, lighter and more powerful compared to the standard model, but was also offered in full road-going trim for special clients.
Starting from a good platform, Aston Martin stripped, shrunk and gave the DB4 more power. Many of these developments were tested on a prototype known as SP199/1. This is the same car that won its debut race at Silverstone and raced alongside the Le Mans-winning DBR1 at the 24 Hours of Le Mans.

Externally, the it was noticeably distinct, having a 5-inch shorter wheelbase, new front cooling vents and a much larger hood scoop. Like the SP199/1 prototype, closed headlights were fitted. Inside, the rear seat was gone as well as any unnecessary items like the roll-down window frames were gone. Unlike many race cars of the period, the Aston Martin was still very well appointed inside with Connolly leather upholstery and Wilton wool carpeting.

A large weight savings came from the use of 18-gauge aluminum on the Superleggera body which was licensed from Touring of Milan. It used a skeletal steel tube framework to support an aluminum body. In total, a regular DB4 GT was roughly 45 kg (100 lbs) lighter than the standard road-car, but Aston Martin prepared a lightweight version for racing teams like Essex Racing.

Aston Martin db4 In top spec the Inline-6 engine was tuned to offer 302 bhp thanks to a twin-spark setup and triple dual-choke Webers. This was a substantial increase over the standard 240 bhp DB4.

The public got a first view of the DB4 GT at the 1959 London Motor Show. After a few years development and a 75 car production run, the GT was replaced by the more purpose built GT Zagato. The Zagato version was a faster, more lightweight car. Also, six DB4 Series III Vantages were fitted with the GT spec engine and are sometime referred to as DB4 GTs.

Lightweights
Of the 75 Aston Martin DB4 models made, around six were delivered in a Factory Lightweight specification. Ex-Aston Martin Chief Engineer describes these cars as “ordered and built as lightweights from the start were so described on their build sheets and completed by the Competition Department or in some cases by the Service Department, depending on the work load of each group at that time. The “Bespoke” GT chassis were modified to lightweight spec after build completion, but before their final assembly by the service shop.”

Chassis 0124/R, 0125/R, 0167/L and 0168/L were built as Lightweight models from their build sheet, but many were later adopted with many of the Factory Lightweight components which included the following upgrades:

Chassis & Sales
0175/L-The last DB4 GT built in 1964 before Zagato took over production. Aston Martin db4 Shipped to first owner A.G. Medawar of Switzerland with registration 934 CGT. Extensively raced by Charlie Turner in the 1970s. Full restoration in spring of 1994 by Robert & Jon Clerk of Performance Tuning & Restoration in Pompano Beach, Florida. Restoration included fitting of many modern parts for vintage racing, and use of lightweight parts. Sold at RM Auction’s Automobiles of Arizona event for $1,001,000 with an estimate of $950,000-$1,000,000 USD.

0168/L-1959 Aston Martin DB4 GT Factory Lightweight. One of four factory lightweights first ordered by Rex Woodgate of Aston Martin North America in Peony Red. Entered by him in the 1961 Sebring 12 Hour Race but custom delays meant it was a no show. Never raced. By 1988 it had traveled 54,945 miles and total restoration was performed. Aston Martin db4 In 2001/2 safety features were installed for historic racing. Sold at RM Auction’s 2007 Monterey Sports & Classic Car Auction for $1,650,000 with an estimate of $1,650,000 – $1,850,000 USD.
0157/R-1961 Aston Martin DB4 GT, licensed 41 DPX. Our feature car is the few done up to street specification with full width bumpers.
Image : By Aston Martin
Read More : https://car-tuneup.com/aston-martin-db4-reviews-specifications/