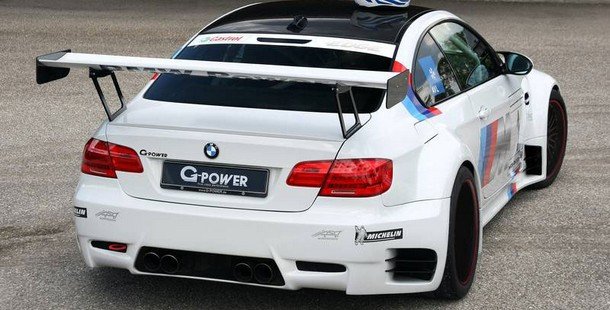 BMW M3 GT2 R A results of the modification is so well-known specialist in Germany G-Power to bring back modified car that became the highlight automotive lovers. The successes of the BMW M3 sports car or a concept such as a race car look so cool. Saloon car sport modified G-Power M3 GT2 R is allowed to roam on the highway, when the speed of the BMW car that can be produced more bias than the normal speed of the car as usual

Modified BMW M3 done by G-Power is capable of producing 720 HP, results of is greater than the 300 hp M3 modified or regular. The car weighs 1,500 kg a Club sport version of the BMW M3, but the mechanical team G-Power managed to change the car’s performance becomes very fast. Saloon Car which has a two-door appearance changes and some additional parts of the exterior and interior.

G-Power’s car modification to changes quite successful on the BMW M3, with torque reaching 700 Nm, this car only takes 3.7 seconds to accelerate from rest to a speed of 100 km / h. Meanwhile, when asked to run, then he had to stop at the speed of 330 km / hour. The performance results are not escape from the mechanical performance of the G-Power is so carefully by considering all possibilities.

Produced speed of the BMW M3 GT2 R is obtained by performing the turn of a new crankshaft that makes the V8 engine capacity increased to 4.6 liters from 4.0-liters. BMW is also supported by the G-Power supercharger system SK III Sporty Drive M3.

With the change can produce very good performance race cars and make an impression embedded in M3 GT2 R’s. G-Power install Michelin Pilot Cup tires 245/30 ZR20 front and 315/25 ZR20 at the rear, these tires do have a very wide size, it is done to offset the velocity Produced by the BMW M3 GT2 R. comfortable interior package embedded in the M3 GT2 R and attached bench racing and a roll bar.

Body kit made from carbon fiber, including the front bumper, rear side kit, and rear wing with a dynamic hood design has 3 large vents for cooling the engine useful