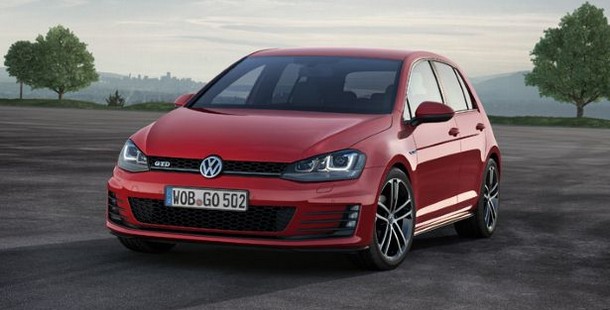 Golf GTD – Golf GTi variant launches more ‘fierce’ as compared with ordinary Golf it has become tradition of Volkswagen (VW) long time ago. The same is happens for strong diesel variant, the Golf GTD that has existed since 1982 ago. And recently the German manufacturer just introduced the Golf GTD.

Golf GTD is arguably is the Golf GTI with a diesel engine. Of course when compared with ordinary diesel Golf, this car owned power greater. Engine used by hot hatchback with a capacity of 2,000 cc common-rail of diesel 4-cylinder and include with a turbocharged.

Power which ejected by 181 hp and torque of 380 Nm. The engine is paired with a 6-speed a manual transmission as standard complete and also supplied with a dual clutch DSG transmission 6-speed. For the The Performance VW Golf GTD is able to claim that the acceleration from 0 km / h to 100 km / h in 7.5 seconds. And for maximum speed is 229 km / h.

In terms of appearance, this car looks like a Golf GTi. At the front we can see grille and lower Duara channel that use a honeycomb shape. Placed the logo on the grille ‘GTD’ which function to distinguish the GTI. In addition VW designers also change the fog lights which now placed vertically and include with a black accent stripes.

At the side the VW to add side skirts and 17-inch rims use. While it comes with a rear LED taillights which dark nuance. Not only was it to distinguish the ordinary Golf presented by twin exhaust with chrome accents, rear diffuser, and rear spoiler, redesigned so as to have a larger size.

Golf GTD For the interior, the manufacturer incorporate sport-style seats with tartan pattern. In addition, there which now the ceiling is black, three-spoke steering wheel with a flat bottom, stainless pedalstainless, gear lever with the logo ‘GTD, and so forth not like Ford Focus RS500